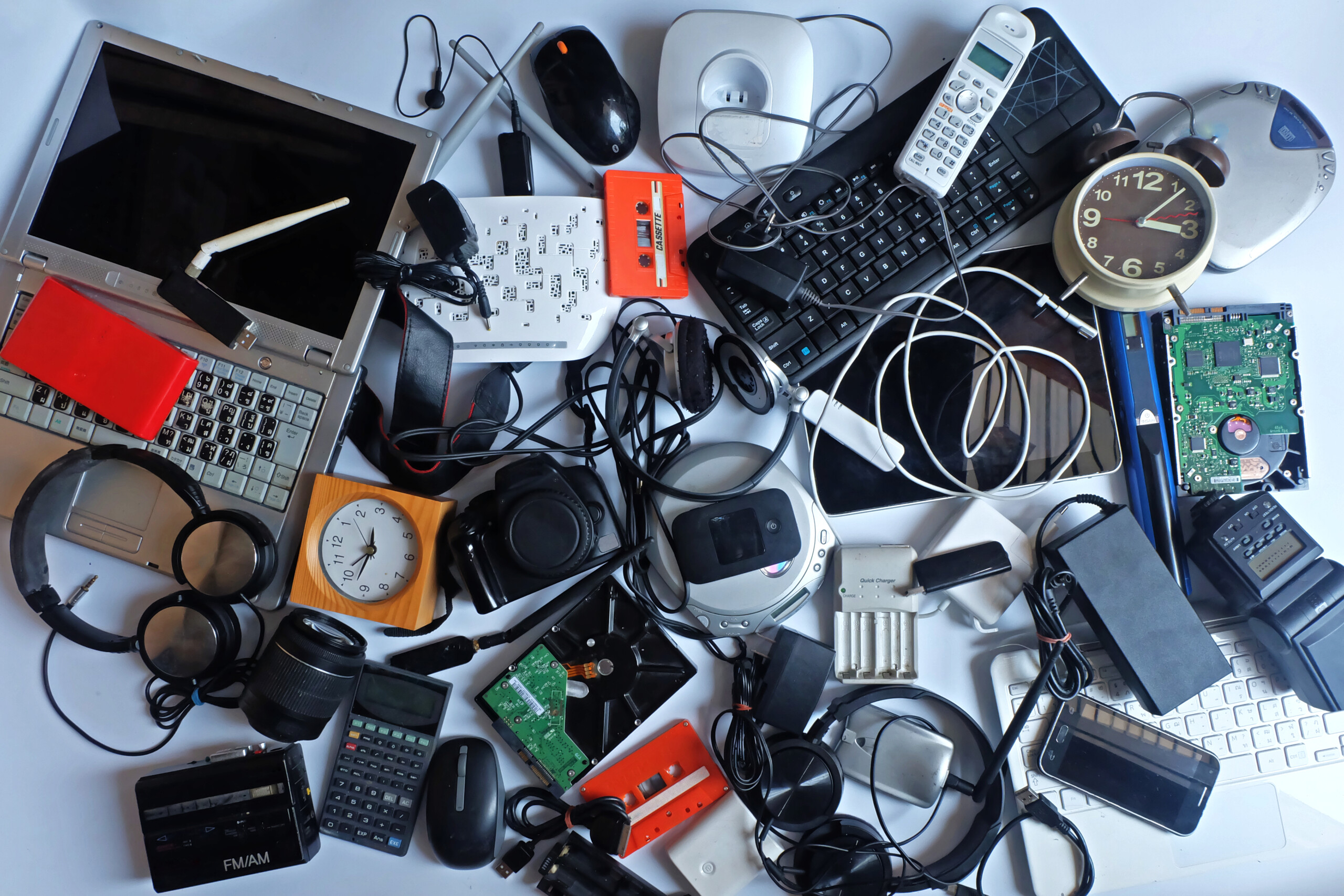 Even if you were paying close attention to this month’s G-7 summit in Britain, you might have missed an interesting sidebar story. Sculptor Joe Rush erected a piece of art just outside the Carbis Bay Hotel where world leaders were meeting.

Composed entirely of electronic waste (or “e-waste”), the sculpture depicts the faces of the seven world leaders attending the summit. Rush called his piece “Mount Recyclemore,” telling the BBC it was intended to call their attention to the problem of the waste produced by our electronic society.

The green-home builders at Tommy Williams Homes here in Gainesville found themselves smiling at the ingenuity of faces composed of old computer monitors, circuit boards, and iPods not so subtly making the point about the mountains of e-waste our society produces every year.

The growing problem of electronic waste

We’ve known for decades about the hazards of air pollution to our health. We’ve learned in recent years about the tragedy of plastic pollution in our waters, including the ocean.

But, as Apple and Samsung and Sony and others compete to release the latest in electronic gadgets, largely hidden from view is the environmental cost of all the electronic gadgets we run our lives with these days.

Between technological advances and consumer demand, e-waste has soared. According to the Global E-waste Statistics Partnership (GESP), e-waste volumes grew by 21 percent in the five years between 2014 and 2019. In this time, 53.6 million metric tons of e-waste were generated. However, the same study estimated that only 17.4 percent of this waste reaches formal management or recycling facilities.

Aaron Blum, the co-founder, and chief operating officer of one such facility, ERI in Fresno, partly blames us.

“In our society, we always have to have the new, best product,” he told Time magazine.

His co-founder and executive chairman John Shergerian, also points the finger at planned obsolescence, showing the Time reporter “dozens of televisions from the 1970s and 1980s that stopped working only recently.” These days, he explained, most electronics last only a couple of years before they either break or become obsolete due to continual technological upgrades.

“Our products today don’t last as long as they used to, and it’s a strategy by manufacturers to force us into shorter and shorter upgrade cycles,” he told Time.

E-waste is not only costly for us to have to keep upgrading, but it’s also hazardous.

This month the World Health Organization (WHO) released a report titled, “Soaring e-waste affects the health of millions of children, WHO warns.”

“As many as 12.9 million women are working in the informal waste sector,” the report says, “which potentially exposes them to toxic e-waste and puts them and their unborn children at risk.”

“Meanwhile, more than 18 million children and adolescents, some as young as five years of age, are actively engaged in the informal industrial sector [disassembling e-waste] . . . because their small hands are more dexterous than those of adults.”

The hazardous chemicals from these products can include:

These dangerous chemicals cause such issues as thyroid problems, neurocognitive issues, and cancers when people come in contact with them. And, Treehugger warns, they can spread far distances.

“For example, they can reach bodies of water and land through atmospheric movement, can affect soil matter by water runoff, and can contaminate aquatic ecosystems. The release of these chemicals in the environment can lead to widespread ecological exposure and contaminate food sources.”

How to handle electronic waste

As the Mount Recyclemore sculpture makes clear, this is a worldwide problem that requires international governmental intervention.

But we can do our part, as well.

First, by resisting the urge to upgrade every time a new product hits the market. This encourages tech companies to change products simply for the sake of change. It also adds our old now-incompatible—but perfectly useful—products to the e-waste stream.

And second, by recycling our old electronic waste. Here in Gainesville, the city offers a comprehensive e-waste recycling collection program. You can either drop off your e-waste or arrange for curbside pickup.

For the finest in energy-efficient living, be sure to check out the full line of Tommy Williams Homes’ net-zero homes.

Plant a Tree, Save the Planet

Spring is here and the earth is coming alive, which is why the green-home builders at Tommy...